Intermediate in school education will be incorporated. Inter is considered a senior secondary education after the merger. A committee headed by Balakrishnan on education reforms met on October 20 with Education Minister Adhikulam Suresh and officials. At this juncture, Inter was discussed in the merger of schooling. They are of the opinion that the K-12 approach should be taken in school education. Under this policy, pre-primary education (LKG and UKG) is required to be started in public schools. Strengthening the Anganwadi Centers already conducting pre-primary education? Or is it to set up basic education in government schools? The government has to decide whether. 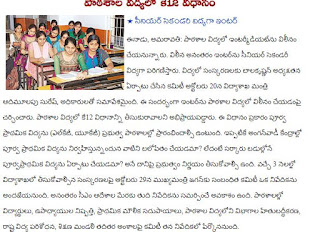 The relevant committee will issue a report to Chief Minister Jagan on October 29 on reforms to be made in the next three months. It is then possible to submit the final report at the behest of the CM. In its report, the committee will look at the proportion of pupils and teachers in schools, basic infrastructure, rationalization of sections of school education, state education research and training board.